Skip to main content
100 years of insulin: inspired by past innovation, excited for the future of type 1 diabetes

This year marks the 100-year anniversary of the discovery of insulin as a treatment for people with type 1 diabetes (T1D), and over the past century, progress in diabetes care has been one of the great stories in the history of biomedicine. Many years ago I read the remarkable book “The Discovery of Insulin” by Michael Bliss, and it helped shape my understanding of science and medicine, of individuals and teams, and how advances in human biology and therapeutics can transform the experience of families living with a disease. I became an endocrinologist, cared for patients with diabetes, for 20 years studied the genetic basis of diabetes, and now as the Chief Scientific Officer at Vertex Pharmaceuticals Incorporated, we are working towards creating stem-cell derived therapies with the potential to treat patients with T1D.

The history of T1D is a story of endocrinology and physiology, of chemical purification followed by advances in biotechnology, and of clinical investigation of the highest order. It has resulted in a great extension and improvements in the lives of families with T1D, albeit at the cost of meticulous ongoing care. The future of T1D well may be shaped by advances in cell and genetic therapies that have the potential to replace and restore the cells whose destruction by the immune system is the fundamental cause of the disease.

The discovery of insulin and transformation of T1D

T1D has been recognized for thousands of years. The name refers to the sweet urine produced by people with diabetes. The disease's full name, diabetes mellitus, comes from the Greek word diabetes (meaning to siphon or pass through) and the Latin word mellitus (meaning honeyed or sweet). Before the advent of insulin, diabetes was an acute disease with survival measured in weeks to a few years. Patients were typically young and would succumb to diabetic ketoacidosis (the body not being able to metabolize sugar and energy correctly). Remarkably, the leading therapy was starvation, which prevented the body from metabolic disarray but resulted in gradual decline due to malnutrition.

The discovery, purification and industrialized production of insulin led to remarkable and dramatic advances in the treatments for people with T1D. With appropriate insulin treatment and dietary control, diabetic ketoacidosis would resolve, glucose levels would return to a manageable range, and patients could return to their lives. Given the long history of T1D as a lethal disease, this was appropriately seen as a miracle.

The initial team included a professor, a surgeon, a medical student and a visiting chemist: without any of them, progress would not have been made. Moreover, without the rapid industrialized production of insulin by companies, the benefits would have been limited to a handful of patients. We are appropriately impressed by the discovery and deployment of COVID-19 vaccines over a period of a year in 2020, but it’s worth remembering that a century earlier insulin progressed from initial discovery to widespread clinical use over a period of less than three years. 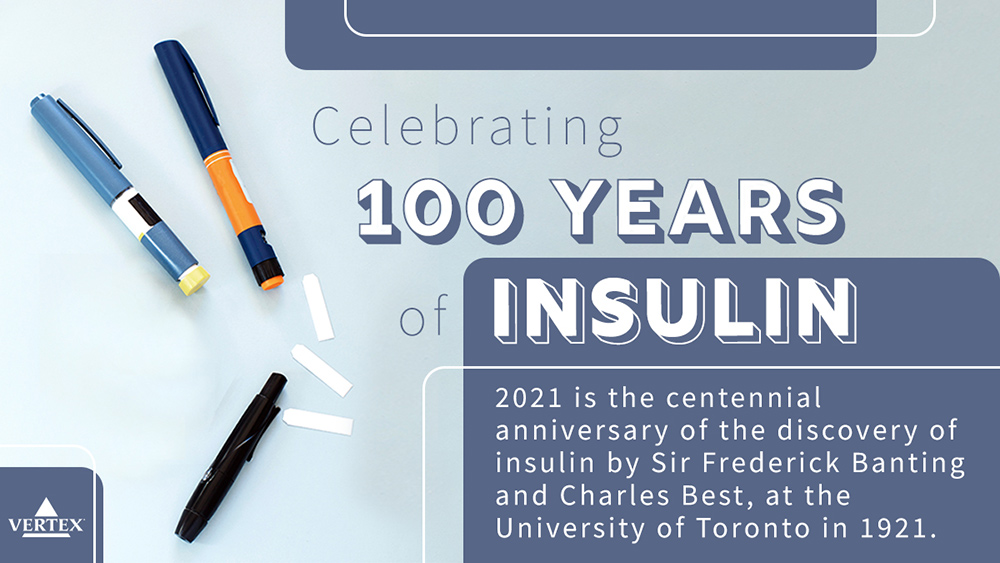 Over the next 50 years, T1D shifted from being a lethal disease of childhood to a lifelong chronic disease. Life expectancy increased by decades, and a new constellation of symptoms appeared: hypoglycemia associated with insulin overdose, diabetic ketoacidosis associated with interruption of insulin treatment, allergy to insulin made from pork and beef, and long-term complications of blindness, amputation, kidney disease and premature coronary disease. The underlying endocrinology and pathology of autoimmune destruction of islets was elucidated. But, despite all this progress, it remained unclear to what extent these latter complications were due to inadequate glucose control, complications of the treatments or the underlying autoimmune process.

A half century later, advances in understanding and care of T1D

Until 1982, when the first synthetic human insulin was approved by the U.S. Food and Drug Administration, insulin was derived from the pancreases of animals; tens of millions of animals were needed every year to meet the demand for insulin in the U.S. alone, and allergies were common. The advent of modern molecular biology made it possible in the 1970s to clone the rat and then human insulin genes, and human recombinant insulin was one of the first foundational products that launched the biotech industry.

Around this time, the advent of finger-stick blood sugar testing helps facilitate tight control of blood sugar based on frequent monitoring and multiple insulin injections a day. The 10-year Diabetes Control and Complications Trial (DCCT), a landmark study that ended in 1993, demonstrated that tight insulin control in people with T1D can substantially reduce the development of eye, kidney and nerve disease. These advances proved that it was ongoing hyperglycemia (high blood sugar), not the underlying autoimmunity or treatment, that led to long-term consequences of T1D as a chronic disease.

By the time I became an endocrinologist in the 1990s the foundation was laid: tight control of blood sugar was a proven approach to treating the short- and long-term consequences of T1D. Caring for these patients, I saw the great benefits, but also the challenges: from the first day of diagnosis, caring for T1D was a constant and lifelong requirement; patients were constantly on alert to the consequences of both hypoglycemia (low blood sugar) and hyperglycemia, and they had to manage their diets and exercise with meticulous care. Sadly, too few patients were able to manage their blood sugars consistently at the level needed to prevent long-term complications.

Finally, in 2000, another foundational stone was laid: the publication in the New England Journal of Medicine of transplanted cadaveric islets with immunosuppression as a potential cure for patients with T1D. However, widespread use of islet transplantation and pancreatic transplantation has been limited by the available supply of suitable donor tissue and the transplantation barrier, but it has shown that a cure for T1D could be possible.

As we enter the second century of the treatment of T1D, I’ve been reflecting on the remarkable progress made, and the many millions of lives that have been, and continue to be, transformed by insulin treatment in its various and improving forms. I think about the advances in biology that were needed to understand the underlying cause of the disease, the chemistry needed to purify and manufacture insulin from animals for use in humans, and the birth of the biotechnology industry with the invention of recombinant insulin using genetic engineering. I think about the courageous clinical investigation going back to the ancients (who first figured out the urine of patients with diabetes was sweet), the pre-insulin use of dietary therapy, the development of ever-improving approaches to manage blood sugar with insulin. The whole thing is remarkable.

But, as we look forward, we can imagine something even better: a one-time treatment for T1D that allows patients to lead a more normal life. The foundation of this vision comes from the clinical evidence on islet and pancreatic transplantation, and advances in cell and genetic approaches in T1D that will potentially give people with T1D the means to make insulin in response to physiological need. We are grateful to work with Dr. Doug Melton, who has dedicated the last 25 years of his life to develop methods to create mature, functional islets from human stem cells. By getting at the loss of islets that underlies the disease, we can envision the possibility of transforming this disease, an aspiration that guides everything that we do at Vertex.

Standing on the shoulders of giants, we are grateful for their contributions and aspire to make the next set of transformational advances to advance the care of patients with T1D in the years to come.

Derya Balata and Teame Araya are Vertex’s newest Science Leaders Scholars. Learn more about these two outstanding students who have been selected to receive a four-year, full scholarship to pursue a STEM-related course of study at the University of Massachusetts.

September is Pain Awareness Month in the U.S., dedicated to raising public awareness around pain, pain management and the work that pain professionals do every day. Hear from Vice President Jim Jones on why his career led him to clinical development for our pain program.

Learn more
Meet some of the women on Vertex’s DMD team
September 22, 2022

This September, join us in recognizing Duchenne Action Month by learning from some of our female scientists working on Duchenne muscular dystrophy (DMD). These scientists are passionate about their research and raising awareness for DMD.